Garlic facts everything you wanted to know but you were afraid to ask?

We edited this article from Garlic facts and history: "The truth about vampires and health benefits:  https://www.cnn.com/2021/06/11/health/garlic-facts-history-wellness/index.html By Kristen Rogers, CNN.

During a visit to Chicago my cousin and i found a new Restaurant called Cairo's.  the long entryway was festooned with garlic bulbs,  it was like a chathexdrreal to garlic.  it was a great way to introduce garlic to lovers' of Italian and Romanian food.

Why Garlic is wotth using in your meals:

For thousands of years, we've used one vegetable as a spice to flavor our toast, treat ear infections and ward off vampires: garlic.

Garlic is the edible bulb of a plant in the lily family, native to central Asia. In addition to making food taste better, it has traditionally been used for health purposes by cultures such as the Egyptians, Greeks, Romans, Chinese and Japanese.
The folkloric link between vampires and garlic has to do with allicin, the major sulfur "compound that is (briefly) released when the garlic clove is cut," said Eric Block, a distinguished professor emeritus of chemistry at the University at Albany State University of New York and author of "Garlic and Other Alliums: The Lore and the Science."
"The reason for the presence of sulfur compounds in garlic is to allow the garlic bulb to survive (while it's) in the ground, where it's surrounded by predators microscopic and larger," Block said. The smelly, burning "compounds that are released when the garlic clove is disrupted serve to deter further attack."
Some medieval Europeans believed that vampires -- the fictional blood-drinkers that have come to dominate the horror genre -- were created by a blood disease, so people carried garlic thinking it was a strong antibiotic that could kill the monsters. 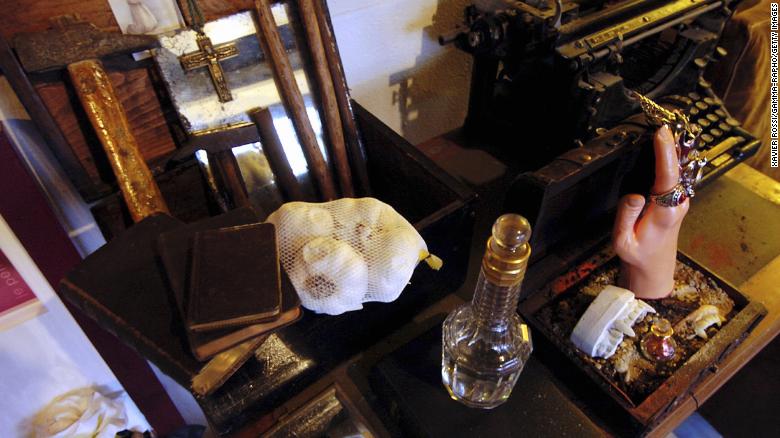 Garlic -- supposedly the most popular "vampire repellent" -- is displayed in the world's first vampire museum in Paris on April 1, 2005.
The blood disorder porphyria may have supported this belief, according to the Carnegie Museum of Natural History. Porphyria is a group of disorders characterized by a defective enzyme our bodies need to make heme, the deep-red, iron-containing compounds that help transport oxygen throughout the body.
Enter your email to sign up for the Wonder Theory newsletter.
Complications of the disorder can make skin pale and shrink gums, which can make teeth look bigger. Garlic and sunlight can worsen the symptoms, so people with porphyria might avoid it -- a habit some people attributed to vampirism. By drinking human blood, "vampires (or people with porphyria) might theoretically replenish their heme stores," said a 2014 paper published in QJM: An International Journal of Medicine.

The role of allicin found in garlic

Allicin is also the compound to which most potential health benefits attributed to garlic have been credited. Some small studies have suggested that garlic may be helpful for slightly improving blood pressure, cholesterol, immune function, the prevention of certain cancers and oxidative stress -- an imbalance that can lead to diseases such as cancer, Alzheimer's and diabetes.
At high doses, garlic's compounds have reportedly helped protect organs from heavy metal toxicity. A four-week-long study of employees of a car battery plant found that garlic reduced blood lead levels by 19%. 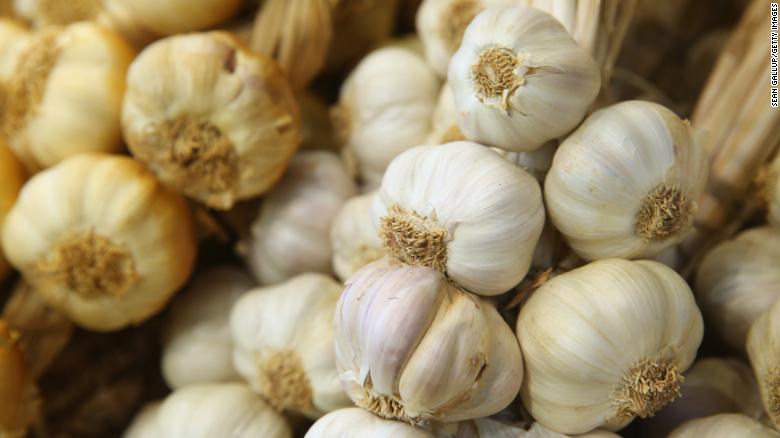 Bundled garlic lies on display at the International Green Week agricultural trade fair (Internationale Grüne Woche) in Berlin, Germany, on January 16, 2015.
"There is a lot of folklore as to the beneficial health effects of garlic in the diet," said Alan Slusarenko, a professor of plant physiology at RWTH Aachen University in Germany, via email. "However, we have no data from controlled clinical trials."
Study results have been inconclusive or subpar. Additionally, many of these studies have used garlic that is a very high dose, concentrated or given in a form of stabilized allicin. Another reason some researchers have stabilized allicin is that when garlic enters the body, the digestive tract must break it down and neutralize it before the liver takes over to carry away waste and help the bloodstream absorb nutrients. Therefore, "the chances of actually reaching a cell somewhere in the body are very small," Block said.

Issue: How to turn allicin into a useful drug

"That's been the big problem: How do you take this compound allicin, with all these wonderful properties demonstrated in (human) cells, and make it into a useful drug?" Block said.
"To try to translate that into a medicine has proven very, very challenging, and has led a lot of companies -- that are out to make money -- to make false claims based on the activity of these compounds in cells," he added. In other words, some companies have been "trying to convince people that just because they're very active in all these experiments, it's also active as a pill or as a supplement."
Benefits of avocados: 4 ways they are good for you
Allicin is "destroyed" when cooked, Slusarenko said, "and off-the-shelf supplements generally have no or variable contents of allicin."
And the US Food and Drug Administration doesn't regulate dietary supplements, so "advertisers can say whatever they want," Block said.

Given these issues, you might think that people could just eat raw garlic for health benefits.
However, this isn't a good idea for several reasons: Because allicin is garlic's very potent defense, eating raw garlic "can cause severe irritation and burns," Block said. The slower a person's metabolism, the more likely it is that they could experience side effects such as rash, heartburn, stomach irritation, and burns in the esophagus or digestive tract.
5 benefits of apple cider vinegar
Some people who have consumed raw garlic or rubbed it on their skin have "wound up in the emergency room with second-degree burns," Block added.
Some cultures don't have this problem. In some areas of the Mediterranean, for example, "people will chew on garlic, and I guess they've developed a resistance to it," Block said. But for many others, it's "dangerous and it should never be used with children. And it should not be used on sensitive areas of the body."

A positive, not a panacea

Maybe the biggest benefit of garlic isn't what science has to say about it, but rather how garlic can help us eat better.
Garlic has around 2% of the recommended daily value of manganese, phosphorus and vitamin B6, and 1% to 2% of the recommended daily value of calcium, vitamin C, potassium and selenium. Garlic's aroma and taste can boost the flavor of meat, poultry, seafood, vegetables, pastas, pizzas and more. "It's just part of a healthy diet, along with eating blueberries and everything else that we might eat," Block said.
Get CNN Health's weekly newsletter

"Scientifically, garlic and onions and related plants are really one of nature's wonders. I think that there's some very exciting science that one can discover," Block said.

"It's possible that, in the future, scientists will discover ways to utilize these remarkable molecules in a way to treat disease. But again, that has to be done using the full power of science to test compounds in a fair and honest way to make sure that they actually work."